T-shirts for sale vs Wigan

I will be in the Tollington on Tuesday night selling these T-shirts £10 each if you buy 2 you'll get the 71/2004 for a fiver. I may also bring some to Newcastle if ordered I will deliever if you pay an extra £2 a tshirt for postage contact me via my Twitter @AFChymnSheet 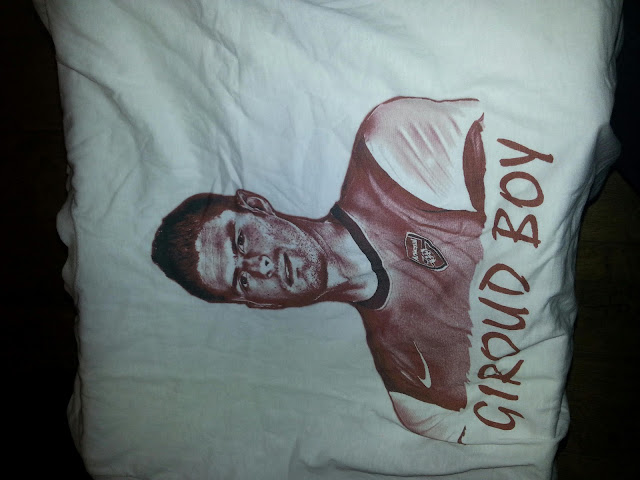 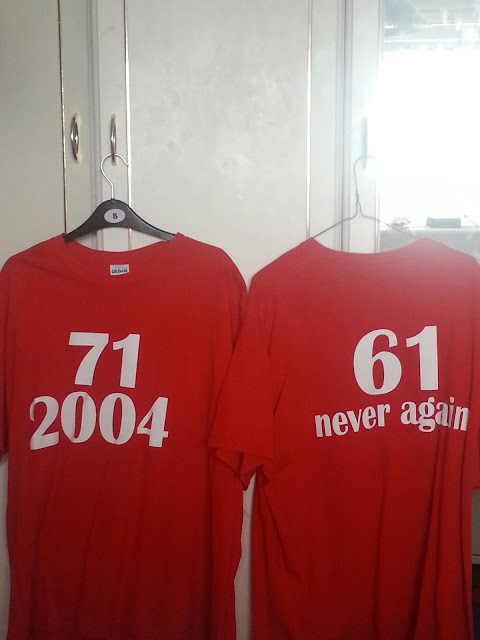 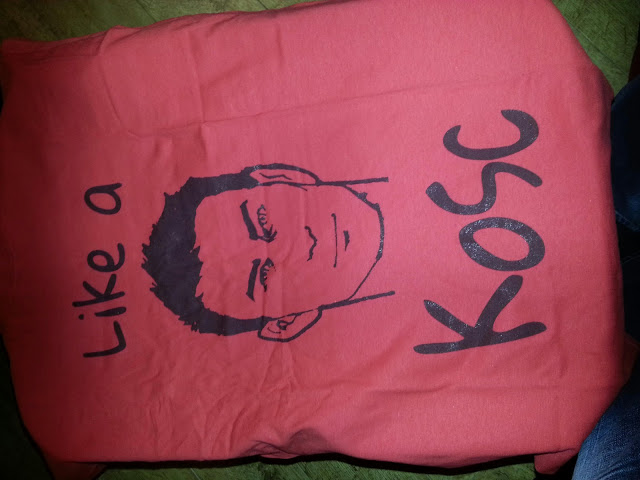 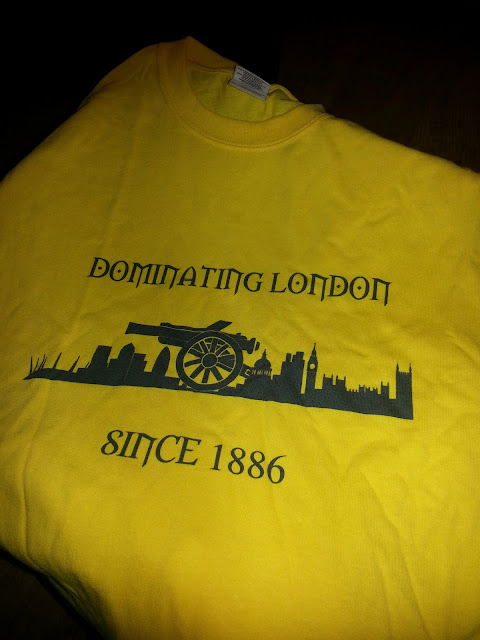 Posted by The Arsenal Hymn Sheet at 02:22 No comments:

The title is a phrase which you hear thrown about a lot, I certainly agree with it. But are Arsenal fans the only ones that are suffering? Because certain factions amongst our support believe us to be the only ones who are being taken advantage of,  the other day I spoke to a Man City via twitter who was moaning about away tickets prices,  I then explained Arsenal fans have suffered this for years,  sadly that's the price of being a successful club but is it?

Arsenal played Fulham Saturday cheapest tickets was £35 still pretty expensive right?  If you compare the price to Leyton Orient who play Division 1 football 2 leagues below us,  how much was their cheapest ticket £25!! Wow that's a tenner cheaper than our game vs Fulham. Greed is amongst all clubs not just our own club, we need to look at the bigger picture here. Until football fans as a whole stand up to the people who rob us because our love dictates that we have to see a game and at any cost, we will continue being ripped off.

In Germany fans of teams boycotted the game for 2 week's to make a stand against the greed in their game. I have been to Germany and few times now, their tickets prices are ridiculously low they get free travel with a match day ticket, the German game has benefitted the fans have benefited from it.  I am not asking you to boycott games but I am asking you to make a stand,  myself I never buy a programme or food in the ground. Now imagine if say 45,000 of the fans at the Grove boycotted Programmes and food it would hit our greedy chairmen in the pocket.

Football is a sport first then a spectator sport second I'm not an idiot I believe we need TV coverage and sponsorship and businessmen involved in the game. But you take away the people who truly love the game the supporters,  the game would be nothing. It's time the fans where treated with respect and the importance we all deserve. It's time to make a stand but in the right way

Posted by The Arsenal Hymn Sheet at 21:49 No comments:

Words by Will Graham
Tune of 'friday I'm in love' by the Cure
I don't care for Chelsea's blue,
Fulham's shit and West Ham too.
Tottenham I don't care about you,
It's Arsenal, I'm in love.

Our best players all depart,
Watching Cesc leave broke our hearts,
Andrey never got to start,
But you're Arsenal, I'm in love.

I don't care if we're bad at the back,
Pass and move, attack, attack
Don't let Wenger get the sack
It's Arsenal, I'm in love.

Saturday I rise from bed
Cafe, then pub, then Emirates
Sing for heroes playing in red
My Arsenal, I'm in love

Right to be honest this is not the basis of greatest Arsenal players, its players who performed heroics against the spuds, there will be some that will shock you, but as I said there is reasons to it.
Ok without further adue my first selection is

GK Manuel Almunia.. Yeah I said it! Shoot me, he is in merely due to the fact he save Robbie Keanes Penalty at the grove

RB Lauren anyone remember that penalty? Proper pisstake to win the game for us

CB Sol Campbell Double Double Sol Campbell has won the double. Coming over to us is enough for him to slot in with Tone

LW Robert Pires love to score against the spuds, he used to run the gauntlet of hate after scoring by running behind the goal

Fw Henry from in his own half made spurs look silly

Fw Bergkamp scored a brilliant goal against them

Now I'm not saying all Liverpool fans are racist, but at least 2 where Vs Oldham. The thing what sicken me most was other Liverpool fans defending these 2 pieces of filth, many went with he was hit by a coin angle or they didn't call him a Black Bastard they called him a Manc Bastard angle.

Either way both where incorrect, the 'fans' where kicked out of the ground. Thats another problem I have, Why wasn't they arrested? I would go further and name and shame them. Liverpool have a chance here after the Suarez fiasco to almost make things right.
Both these 'fans' should be banned for life and given heavy fines.

You may notice I am putting 'fans' rather than fans. There is a reason no true Football fan could share these blinkered views on black players in the beautiful game of Football. Not having seen Pele, Thierry Henry, Samuel Etto, Ruud Gullitt, Patrick Vieira, Yaya Toure etc etc grace the beloved game. How can you be against black people but yet cheer when one scores for your team thats just hypocritical.

Sadly some people get a bit brave on twitter hiding behind a keyboard, thinking they can mouth of say what they want to whom they want. Trouble is if your a big mouth on twitter. You obviously a big mouth elsewhere people will find your number, your address and where you work. Pretty sure that ain't what you want is it?

In previous years we have made great progress at Kicking Racism out of football, but the last few weeks in both Football and in day to day life, we have gone back 20 yrs. We can beat Racism but we all need to work together to sort it

Posted by The Arsenal Hymn Sheet at 18:13 No comments:

Wow its been awhile hasn't it? So the King is coming Home, this should please most people yet it don't. Yes we need a full time striker to help Robin van Persie, but why shouldn't we snap up Henry on a 2 month loan as well?
He is too old I hear to often, he is 34 ffs I might as well give up if thats to old. He fucked off to Barcelona....and? He went there and won the Champions league shall we begrudge him that? Henry served us well. He could lift a deflated team with one bit of genius, as much as I love RvP I haven't seen him do that as much as Henry.
Another cry I hear is 'his legend will be tarnished' Bullcrap people Bullcrap. Henry is a Double winning, invincible and Arsenal top scorer. Do you think if Henry had one bad game or 2 someone will come and erased them records? Henry is a legend and will remain one. You will tell your Grandkids of Henry at the San Siro or in Madrid, the solo goal vs the Spuds, I can  list many things this guy has done.

Moving on from the King, I wish to tell a few people who are constantly moaning, you know who you are. Wenger is not a idiot he knows he needs to strengthen but quite rightly he needs to get rid of the dead wood first. I like Arshavin when on form but he hasn't been for awhile he must be on 80k a week so he needs a new club as he obviously isn't happy here, neither is Chamakh. If we can also ship out Diaby, yes he is a talented player at times but he is always injured.

Who would I like to come in? Well to be honest I don't play Championship Manager like so many of you would be managers do, so I wont run of a list of names, just positions another Striker a left back and a stand in keeper, but I have the feeling we could sign Messi and still some would moan he is one footed

Posted by The Arsenal Hymn Sheet at 05:12 No comments:

We want answers not Excuses

I won't reflect too much on the joke of a performance we all know thats not good enough for Arsenal.
But we certainly want answers to these questions

Q1. Everyone knew Cesc and Cashri wanted off everyone. I love Wenger but surely this is one thing he actually did see happening, why did we not bring in signings to replace before selling them? You had enough time to

Q2. Who is to blame for this is it Wenger, Gazidis, Kronke, Hill-wood or someone else. There has to be someone held acountable to our demise. Does Wenger get the money he needs for Transfers are our contracts not lucrative? Myself I cant see what Wenger has to gain by not signing no one. He is not an idiot. Is Gazidis and Staff shockingly bad in transfer dealing with players. We lost out on Mata due to dithering and penny pinching. Apparently wants the salary cap lifted, so why hasnt it been? We have to pay the highest prices for tickets in English football it doesnt compute with me?

Q3. Who is actually on charge of our Club, I know Kronke is the major share holder but what does he actually do? Hill-Wood gets a good wage but does very little but sell exclusives to the Daily Star

Q4. Why does Wenger keep saying I will buy if they are of top quality at the moment we need just quality to help our top players out. We can rely on a 19 year old kid from Charlton to fill gaps. He isn't ready yet.

Q5. Why does Walcott defend corners put him on half wayline

Q6 4-3-3 just why? Yesterday Wenger could of played 4-4-2 to add more experience he could of gone with Chamakh or Bendtner partnering Robin v Persie. Traore isnt good enough s po Coquelin could of filled in at LB with a midfield of Ramsey Rosicky Walcott and Arshavin.
Q7 are we getting any signings in at all

Posted by The Arsenal Hymn Sheet at 04:45 No comments:

The Arsenal Hymn Sheet
Been watching the Arsenal for 28 years now 33 my passion remains. Stand in Block 5. Also go most away games